Figure 1: The “soft66 Lite” SDR (software defined radio) board. It’s a fun thing to build in a spare three hours, and even more fun to operate!

Recently I’d integrated a “homemade”  tablet into the station, for things like receiving weather faxes and BPSK31 transmissions.  I’d been using external receivers to do that, but mentioned that I really wanted to put a “shortwave” receiver board inside the tablet, for an all-in-one effect.

Towards the goal of building an integrated ham/shortwave powered tablet, I purchased an SDR (software defined radio) kit from JA7TDO (K. Miura). It came in a little baggie in exchange for $20. I thought it would be an inexpensive thing to try, even if it didn’t work. But work it does! It works very well in most ways (it might be a little bit deaf without a good antenna attached. Maybe a preamp could help). The kit is a breeze to build, taking a little less than three pleasantly spent hours of time. The instructions are good, and the components are well marked. Figure 1 (above) shows the diminutive little board, after it was completed, and its size relative to a coin. In the figure, the crystal has been removed to allow the jumper pins to be seen.

The power connector is an addition I made (a female 2.5 cm unit). The audio jack comes with the kit. I put the antenna connector together. After building the kit, and powering it up, I was a little disappointed that no signals were to be found in the waterfall display of the Linrad SDR software I was using with the SDR board, to in effect have a ham/shortwave receiver. That disappointment soon changed to excitement. Initially, I used a little 10 foot piece of wire (on the floor) for an antenna, and it did not produce good results. After connecting the board to a proper twenty meter dipole antenna, I could copy CW and RTTY signals all over the lower end of the twenty meter band. Some were strong. See the waterfall from the maiden voyage, shown below:

Figure 2: The Linrad software’s waterfall display shows a number of signals being received on the twenty meter band. At the moment the snap was taken I was listening to the CW signal on the far left, at a little above 14.04 MHz. On the far right a digital signal can be seen at about 14.08 MHz.

The kit maker provides five crystals, which provide an amazing flexibility in terms of the number of ham/shortwave bands that can be received. The on-board jumper pins can be selected to create various multiples of the crystal fundamental, and cover 3.x MHz, 7.x MHz, 14.x MHz, 21.x MHz, etc, etc. The instructions on his site describe the setup of the various combinations in good detail.

The SDR software may be one of the reasons I’m impressed with the soft66. The other reason could be that I’ve never used an SDR radio, until now. The Linrad software has a beautiful filtering arrangement, with a noise blanker that takes everything away except the CW signal you’re listening to. It’s a little akin to the “capture effect” of FM. The platform I’m using is FreeBSD, to run the SDR software. I’ll have to port my configuration to NetBSD eventually, since that’s what the tablet usually runs.

The unit comes with a BPF (band pass filter) which is the loosely populated dip at the top of the picture. I didn’t solder those components into place, since I knew I might want to change them for other bands. Yes – the SDR radio will do eighty thru six meters! Those BPF components look a little ugly with their long leads. Oh well. Of course the idea is for the builder (me) to buy a few more of the dips, and populate each of them as needed for the band(s) of operation, to make it all plug and play. But, I didn’t happen to have any extras in my junk drawer. 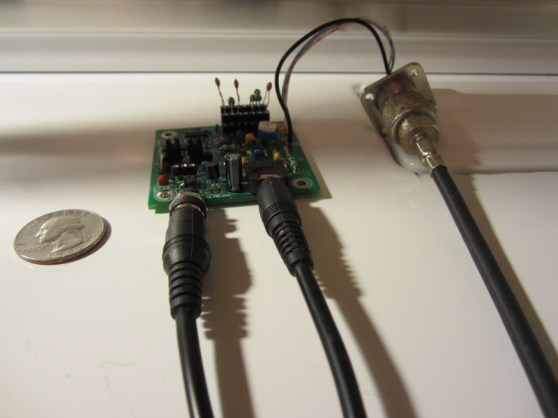 The Linrad software can be found at:

In the Linrad documentation, there is a reference made to libsoft66 as an option. This option is only necessary if you’re going to control the soft66 via control software, for the slightly upscale versions of the board. The soft66 Lite board that I’m using doesn’t have any control capability, but that’s not a big deal for me. So, I selected “undefined” in the SDR setup menu, instead of “soft66” (which would require that I have the libsoft66 library).

I’m only using a 48 KHz sample rate card. It’s a Cirrus Logic (4281) card from 1999. Notice in the waterfall display, at the top, the frequency goes from ~14.040 to ~14.080 (There’s your sample rate). It’s nice to get audio in the headset for the CW signals I was trying to hear, rather than just watch the waterfall. I ended up using two cards. I use the Cirrus to “receive” the IQ signal from the SDR board (“A” – “Rx input” menu item), and I use the on-board NVidia sound card for the “B” (“Rx output” menu item). This channels the audio produced by Linrad, after it processes the IQ signal, to the NVidia card (“B” – “Rx output” menu) for listening. Anyway, I could just as easily channel the audio output of Linrad to the input of Fldigi, to demodulate shortwave weather facsimiles. Since (by itself), I don’t think Linrad knows about WxFax, I’ll probably have to do something like that. Stay tuned.

On FreeBSD, I’m not using the SDR software’s portaudio menu option. Instead, I’m using raw /dev/dsp* devices. So, it’s a little tricky when you have two cards, and you need to set the mixer values. Here’s the fix for the tricky:

Then, to save the mixer settings:

Note: the soft66 Lite hardware is a product that is sold on a Japanese website (http://zao.jp/radio) – and is not affiliated with this site or author in any way.

My experiences with Tor

The Universe: Lyotropic Crystal, Self Assembly

The Nature of Light II

Light Creates/Grows Latticework as it Propagates

Where did the friendly people go?