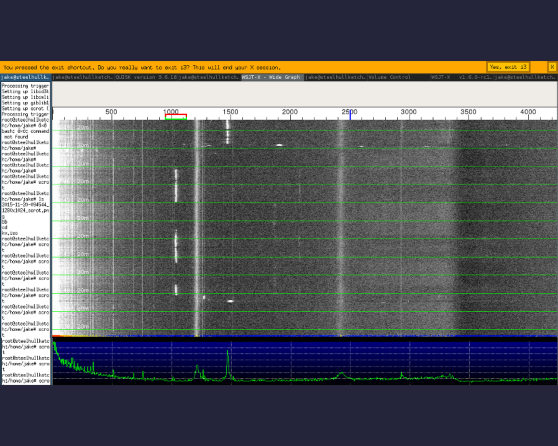 Figure 1: Shown in the graphic is a snap of WSJTx running with the Soft66 Lite (SDR hardware) plus the Quisk (SDR software). At the end of the chain, WSJTx is displaying two nice CW signals. No JT decode there! 😦

Thus far, I’ve not found many JT-9 or JT-65 signals on the bands, but I’ll keep trying. Meantime, WSJTx displays the CW signals nicely. Below, is shown the Quisk window display for the feed, where the highlighted blip is the strong CW signal on the right hand side of Figure 1. 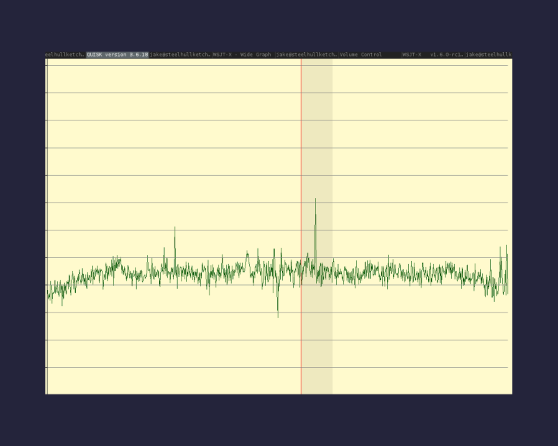 I decided to utilize the simple SDR hardware by using Quisk as the SDR software, and FLDigi as the digital mode software. With FLDigi I could decode PSK31, Weatherfax, RTTY, and other digital modes. It was simply a matter of stopping the WSJTx process and starting FLDigi. The FLDigi software picked up the audio feed with no manual intervention. After launch, it presented itself in the Pulseaudio control app (pavucontrol) recording tab, as:

One note: Sometimes it was necessary to stop and restart Quisk to get it to pick up the SDR hardware feed.

So the flow of signal is:

It wasn’t really necessary to use two sound cards. I had them available and so I used them. In reality, for my case the second card was needed because the input circuits of the on-board card had been destroyed (previous owner, I think). Note that I used no physical cables to connect anything, other than to take the input from the hardware SDR radio. Pulseaudio in this case acts a bit like jackd, in terms of mixing and matching audio sources. Having two cards buys some isolation of signals, I think.

Maybe newcommers are bewildered at the number of programs, and the purpose of each of them. So, here’s a quick glossary for the packages we’ve been writing about:

One other note for the uninitiated: The SDR software packages allow usually for the selection of a signal (a slice of its total bandwidth) and the output of that slice to a device such as a sound card or another piece of software. That’s why I could listen to CW and SSB signals simply by monitoring the output of the SDR software. It’s a seemingly obvious thing, to all but those who haven’t done it!

Take a look at the display at the top of the page (Figure 1). The graph is showing 4 KHz worth of signal from the twenty meter band, and a nice CW signal at around 14.078 MHz.

Inadvertently, I discovered another use for the SDR. Its crystal frequency imitates a nice crystal based frequency calibrator for the other, regular ham rig (which has one already, but what the heck). I checked it against WWV, and it was spot on. 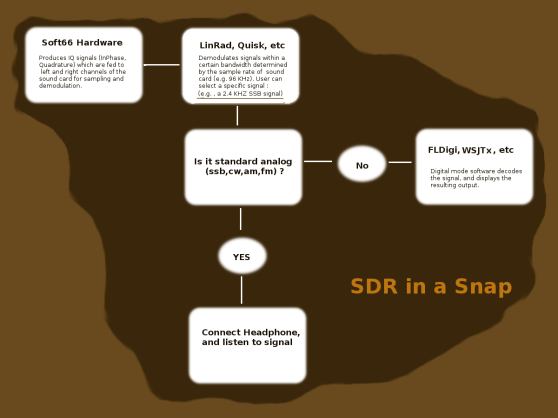 Figure 3: A visual for the signal flow of SDR (at least in the case of our particular hardware and software combinations.

The graphic in Figure 3 illustrates the basic process of SDR as used in ham radio. SDR has been around for a while; books were written about it as far back as 1998. But, it came to the fore with the proliferation of cells phones, wherein it was necesary to demodulate FM signals easily in software, to provide for the desired compact form factor and low cost. For a good intro to IQ – (I)nphase, (Q)uadrature baseband signaling – the following website provides an excellent top level view, with nice animated graphics to help with visualization:

I have no affiliation with any of these packages and components. All are open source projects, and can be found at the following URLs …

Linrad can be found at:

FLDigi can be found at:

Quisk can be found at:

WSJTx can be found at:

Soft66 Lite hardware can be found at: