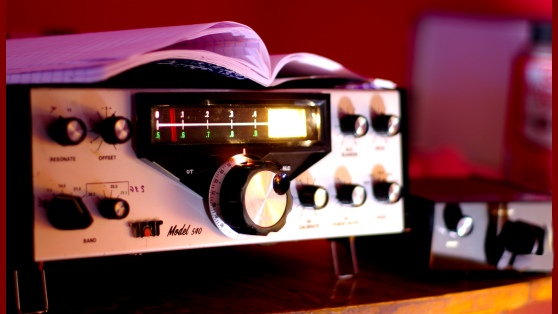 Four times I courted her.  Three times I dropped her.  This time it’s forever.  Over the years, I’d managed to find myself paired with the one whose songs were so delightful, whose voice stuck in my memory for the whole day long.

Impressionable and easily infatuated, my young mind learned of the CW siren, that seductress of the airwaves.  Long into the night, I listened to her soft messages, sometimes drifting off to sleep with my hand on the key, eventually slipping into one of those sweet dreams of hamdom.

Somehow I’d managed a date with the siren, on several occasions, but allowed her to slip away for one reason  or another.  I was so fortunate that one day,  while strolling the streets of Ebay, I found her standing there.  The years were evident, yes.  But I could see the song still sang from her eyes.  Her owner was not so infatuated as I had ever been.  He’d put her on the block, calling her worn out and “junk – for parts only, no longer functioning” or some such.  I didn’t bother with his opinion too much, I just gazed at Ms Triton.  For a long time.

At home, I put the venerable old Ten Tec 540 analog transceiver on the bench. I plugged a power supply into the back of it, and an old Ultramatic Ten Tec keyer into the appropriate RCA phono jack.  She sprang to life.  The sound was as always, clear and crisp melodies.  But what was the range of her voice … did her old power MosFets still have that range and power of which legends were made?  The wattmeter rang out her highest CW note, putting the needle at 100 watts on the old yellowed scale … and maybe even a pinch more.  The years had not taken her voice away.   Awesome.

This time she’s home to stay.

Note the old Ultramatic keyer to the right of the radio.  It uses the ultramatic mode of CW keyers, as opposed to the iambic A and iambic B modes.  The ultramatic mode was designed in 1953, and the first Ten Tec keyers used it.  The model number is 645, and it’s a bit hard to find.  For many years I used the iambic Autek keyer and a Bencher paddle.  I wouldn’t say one is better and one is worse.  But, paired up with the TenTec 540 transceiver, either is delightful.

Listening to the QSO, you can hear most of the static on the band between dits and dahs.  This made for an almost duplex sort of experience, called QSK.  The Ten Tecs were famous for this mode of operation, albeit newer rigs have it as a default mode.   The 540 radio’s QSK speed is built-in with a very fast response and recovery, although I sometimes wish there was a front panel switch for changing the recovery speed to something slower (like on the Omni series of transceivers).

The only thing my fourth model 540 rig does not have (that my original one did) – is the fabulous noise blanker.  It could work wonders with noise.  Will be trying to find a “Junk, for parts only, not functional” noise blanker to match the radio (hi hi).  For the non-amateurs:  “hi hi” is ham radio jargon for LOL or LMAO.  Have to make distinction based on context, hi hi.

In the video, you can hear a vibration when I am sending.  This is NOT the CW sidetone of the radio.  I had left an empty aluminum minibox on the table, and the speaker pitch was just the right level to set the box into vibration.   The CW sidetone is normally excellent on the Triton, and is variable (in pitch and volume).

The Triton I and II in the series were manufactured in 1976 or about that time.  The Triton IV was manufactured from the late seventies (1978/79?) until sometime in the early eighties.  The Triton was a big jump from my old Swan tube type radio (I had the “magic eye” tube-type Swan).  You adjusted it by the opening/closing action of the eye.  Cute.  Anyway, the Triton was/is cuter.

The term “Triton” was dropped by Ten Tec due to litigation.  So, from that point onward just the model number was used to identify it.   Most Ten Tecs have both a model number and a name, such as were assigned to cars.   So, there is a Corsair (badly selected?), Omni, Pegasus, Century (had one of those – the car version), etc.  It’s an interesting course in history to read the 540 manual.  It takes great pains to explain the difference between tube and transistor operation, since at the time of release, most hams were still using vacuum tube gear.

The common thread is that I like the old gear from the early transistor era.  The discrete transistor radios are very fixable, as they usually lack proprietary integrated circuits.  So, the Ten Tec model 540 is like the old Alda 103/105 series, and was manufactured in about the same time frames.  I have radios in both series.  They’re fun to use, while being pretty simple in operation.

Note: Ten Tec still exists as a company, although there was a change in ownership.  The Ten Tec name is trademarked by its respective owners, and this site and author has no direct relationship with the companies (new or old).

Why are Cloudy Days Blue?