This article revisits the Vanguard 260 PL, a weather satellite receiver from the seventies that I found (as a rare bargain) on Ebay.  It covers the 137 MHz NOAA LEO/APT Weather satellite frequencies, when it’s fixed up with the correct crystals.  I love the simplicity of the unit, and it works well given both the time period of the technology, and the low parts count.

Back in August of 2015 I purchased the Vanguard unit from a seller on Ebay. During the same general period of time I purchased a trunkload of PVC pipe from a local home improvement store.  I had pipe dreams of building a Quadrifilar Helix Antenna, hooking it up to the Vanguard, and  producing medium resolution satellite weather images on my own accord.  Yippie!  Well, time passed, and I found other projects to occupy my time.  Recently, I got back to the Vanguard, and restarted my project.  Note: The Vanguard was built by a now defunct company (not related to this site in any way) – and is a thing very close to unobtainium.   If you find one, let me know.  I really like these things!

OK, so I did build the QFH antenna: 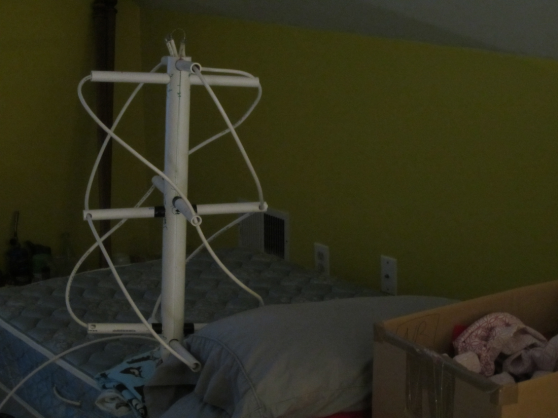 Figure 2: A homebrew QFH antenna sitting in an unused upstairs bedroom (not its permanent location!)

Yes, the QFH is a little caddlywumpus in shape.  They tell me this doesn’t hurt too much (depending on the slant of the caddlywumpus factor).  I have seen pics presented with worse caddlywumpus shape factors, while the authors simultaneously claimed that the satellite images resulting from the use of such things came as easy pickings.  I guess we’ll see.

The build info for this antenna can be found quite a few places on the net, including:

The first round with the QFH hooked up to the Vanguard was a round filled mostly with static.  It’s not that I mind a little static, but I was expecting more.  Neither the Vanguard nor the QFH would be found to be at fault (details below).

I started the Linux version of gPredict to get the correct time/date schedule for a satellite pass, waited for the pass, and noted that nothing came from the speaker (but static) as the bird flew overhead at seven kilometers per second (the satellite is within reception range for only about fifteen minutes, but fortunately it makes numerous passes!)  A bit disappointed, I used a probe to find the frequency where the Vanguard was actually listening: 135.575 MHz!

What the heck?!  That’s no satellite frequency at all!  I looked at the crystals in the unit, and found the first one was etched with 41.63333 MHz.  This seemed very odd, because I knew of other weather receivers (of the same design, relatively speaking) that used 42 MHz crystals.  What was going on?

I looked at the circuit in the box.  I noticed a first stage 40673 RF amp, followed by another 40673 dual gate N channel VHF MOSFET transistor for a second stage of RF amplification.  This was seen to be fed into a 3N141 mixer, and I could see that the mixer also took a signal from the 126 MHz (2N4258A) oscillator/tripler (via a 42 MHz overtone crystal).  This seemed to be in pretty good alignment with the other receivers I’ve mentioned. Note that I have no schematic for the Vanguard.  It’s apparently beyond unobtainium.  Sigh.  So, I worked with the general block diagram I was building in my head.  So, without tracing out the PCB connections, some of this is guesswork at this point.

The output from the mixer looks to be fed to a 10.7 MHz IF filter, which is subsequently mixed with 10.245 MHz to provide a 455 KHz IF signal, which is fed into the FM detector, and then to the audio amp.

Eventually, I began to suspect that the designer of the Vanguard mixed the difference frequencies of two of the ~41.xxxx MHz crystals to get to the desired frequency, and that did turn out to be a magic trick that made the math work! The new formula, I wrote in my notes was:

The two crystals in my unit had a frequency separation of 8 KHz, so:

Voila! That’s the frequency where my probing indicated the Vanguard was actually listening.

So, if my new formula were correct, the crystals I’d need to get on track with the NOAA #15 satellite would be calculated as:

I then wondered if the two crystal mixing was an intentional part of the design, or a spurious product that allowed reception on the frequency indicated by the new formula.  Which crystals would be needed?  Including NOAA satellites #15, #18, and #19, I needed to have reception at 137.62 MHz, 137.9125 MHz, and 137.10 MHz, respectively, for APT (picture) images from those satellites.

In any case, it seemed likely that my particular Vanguard unit had been re-crystalled by someone to make it work on lower frequencies, for some unknown purpose(s).  Neither the new formula (with the double crystal mixing), nor the standard formula could provide appropriate satellite freqencies with the given crystals, as I had received them in my purchased Vanguard unit.  I apparently had someone else’s project on my hands.  Who knows how many other people had tried to get this particular receiver to work, not knowing it had been re-crystalled.  Was my bargain a bargain, really?  I was bound and determined to make it so, even if it costs me! 🙂

I knew I wasn’t going to find any stock crystals having the correct frequencies, and custom made ones were going to cost about $20 each.  Given that I wasn’t completely sure about my observations, I was hesitant to purchase any custom crystals. It seemed an expensive way to go, and could dwarf the amount I had spent on the original purchase.  So, I decided to use a DDS (AD9851) crystal replacement board in place of the crystals.  The AD9851A board costs only $25, and should give me ALL of the satellite frequencies!  It has TWO sine wave outputs, so I can use a single or double crystal mixing scheme,and still have all bases covered.  It remains to be seen if that will be true, but I see other projects on the internet that indicate good results (but not necessarily using the Vanguard).  I see no reason it should’nt work though.

The AD9851A boards available online, must be controlled with some kind of processor.  Most frequently, I see that people are using an Arduino to control the Xtal replacement boards.

Note: the author does not have a recent, applicable background in circuit building, or battery related issues, so this is presented as the work of a hobbyist, and is not meant for duplication by others. Readers should look elsewhere for design advice and info.